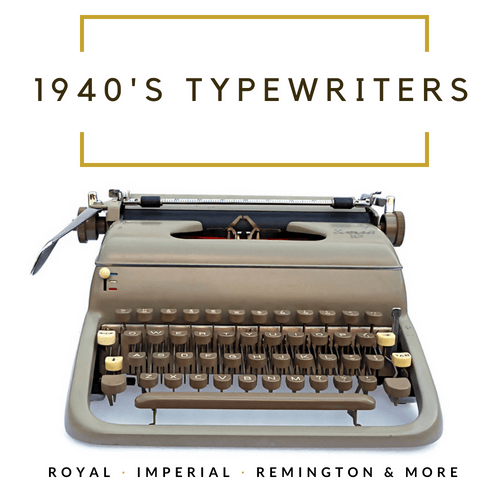 Our 1940’s Typewriters are all working models.

Our working 1940’s typewriters are survivors of a tumultuous time during WWII. From 1940-45, the world rearranged itself: many Europeans immigrated to America to avoid the atrocities being carried out in their home countries, and American women left the home to fill the employment void created by the men now serving in the armed forces. Typewriters from this time were built for the purpose of work. Material excess was avoided and designs became more streamlined and portable.

The Forties were dominated by World War II , as the world was just coming out of the depression. When the war ended in 1945 the world was a different place – the horrors of the holocaust and the first atom bomb hit this decade hard.

The impact the war had on all aspects of life was immense. Rationing was in place so you could not buy as much sugar, butter or meat as you wanted or needed. You also couldn’t fill up your gas tank whenever you wanted.

Famous Writers, Books and their Typewriters from the 1940s

Ernest Hemingway, For Whom the Bell Tolls (1940) – Underwood Noiseless Portable

Looking for another kind of typewriter? Check our other categories here…

Got questions? Contact us, we love to help out. SaveSave