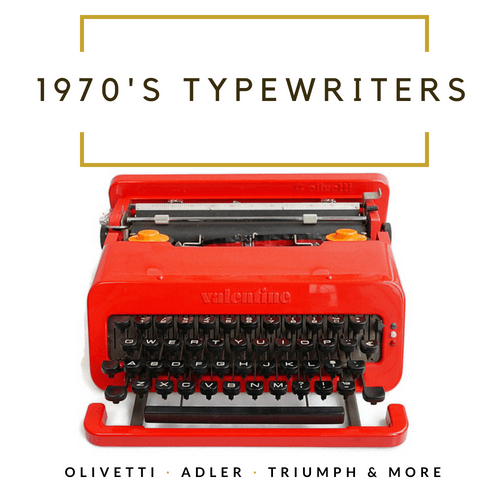 Our 1970’s Typewriters are design marvels!

Some say the 1970’s was “the decade that taste forgot”. But, with the Bad and the Ugly, there is usually some Good. And our 1970’s typewriters are an example of that! The 1970’s typewriters add an explosion of color to your office. Funky and friendly was the main style. Plastic was the material of choice and streamlined angular designs dominated the typewriter world. This was the last major decade of the manual typewriter. The IBM electric typewriter and the introduction of the home computer was the beginning of the end for the classic manual typewriter.

The Oil Crisis, the Watergate scandal and the withdrawal from the Vietnam war all shaped the 1970s.

It was the beginning of the digital revolution as calculators, TVs, VCRs and Atari computers became common household items. It was also the decade that tacky 70s fluff like shag carpet, massive sideburns, and smiley face buttons appeared.

Famous Writers, Books and Typewriters from the 1970s:

Frederick Forsyth, The Day of the Jackal (1971) – Hermes Baby typewriter

Douglas Adams, The Hitchhiker’s Guide to the Galaxy (1979) – Hermes 8 typewriter

All our typewriters are working vintage typewriters that are ready to type with right away.

Looking for other kinds of typewriters? Check out our other categories here….

Want some help deciding which typewriter is best for you? Contact us o w,,wr w,SaveSave