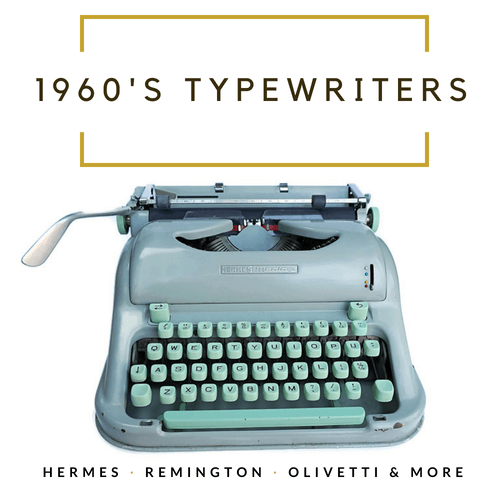 The 1960s were all about change! And, our working 1960’s Typewriters reflect the decade well.

The first walk on the moon, Woodstock, Rock ‘n’ Roll, Politics, and Protests. Our typewriters are a blast from the past. More unconventional designs started appearing and bright colors replaced the standard black. reflecting both space-age dynamics and the influence of hippies and psychedelics.

The 1960s is famous for the explosion of creativity that occurred. Perhaps due to a little too much experimentation with drugs or anger over the Vietnam War! Sex, love and rock & roll was the way of the sixties as people found ways to cope with the changes.

It was the decade of anger with the assassinations of JFK and MLK shocking the world. Protesters were everywhere — there was great social unrest.

It was the decade that man first walked on the moon. Woodstock rocked with Janis Joplin, Jimi Hendrix, Jefferson Airplane and The Who! And, Sesame Street first aired on TV.

Famous Writers, Books and Their Typewriters from the 1960s

Robert A. Heinlein, Stranger in a Strange Land (1961) – Underwood Electric

Want to see more typewriters? Check our other categories here…

Want some help deciding which typewriter best suits your needs? Get in contact, we love to help out!