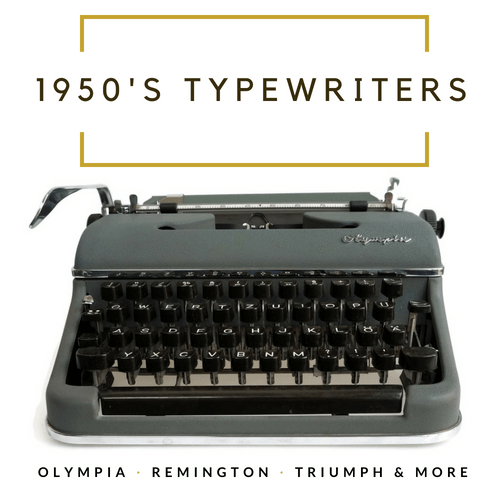 Our 1950s Typewriters are fully working classic mid-century modern typewriters from an iconic time in history.

These typewriters were made at the end of World War II in a time of major changes to society. It was an exhilarating period, full of progress and discovery. The end of rationing and the booming economy gave rise to a wave of consumers eager to have fun and express themselves. Our 1950’s typewriters are great examples of this boom time.

Our Typewriters from the ’50s:

Typewriters from the fifties exhibit classic designs with more of a Scandinavian influence and space and atomic age-inspired shapes, also known as Mid-Century Modern. The vibrancy and elegant simplicity of the 1950’s aesthetic are what makes it so attractive, even 65 years later.

Famous Writers, Books and their typewriters from the 1950s

J. D. Salinger, The Catcher in the Rye (1951) – Salinger most famously wrote on a Royal typewriter.

J. R. R. Tolkien, The Fellowship of the Ring (1954) -Tolkien wrote with a Hammond typewriter.

Jack Kerouac, On the Road (1957) – Hermes 3000 typewriter and an Underwood portable typewriter

Looking for other vintage typewriters? Check our other categories here…

Got questions? Contact us, we love to help out. SaveSave